I am a very social person. I thrive on meeting people, trying new things, striking up conversations and hearing people’s stories. Lucky for me, that’s what the tourism industry is all about. It’s not just about planning a trip, showing people around and selling a city. It’s about making friends. It’s about making lasting connections. It’s about realizing that the people you work with, the people that run a city, the people that are visiting – they’re all just people. They’re wandering through life just the same way we are, just down their own unique paths.

In the last few weeks as I’ve become more ingrained in my role at the CVB, I’ve had so many opportunities to meet extraordinary people. I’ve had media receptions and travel writer tours, plus a formal dinner and several out-of-office meetings. Put simply, networking and socializing are at all-time highs. Whether it’s been work related, or in an attempt to make friends rather than just colleagues, I’ve always had to be on.

You know what I mean about being on. It’s when you want to make a good impression. When you want to hide the fact that you’re slightly nervous in a room full of strangers, and play it cool. When you’re genuinely interested in and excited to meet the people around you, and you want them to feel the same way. So you put on your best face, you’re ever-so engaged and engaging, and totally present in the moment, despite anything else going on in life. That’s not to say you’re being fake – far from it, in fact. You’re just being your best self, so that these new people you’re meeting can see that self too.

Being on is almost like second-nature, especially in the communications and tourism industries. You want to make people feel welcome and comfortable. It’s important to me, and in this line of work, to be able to have a conversation with anyone about anything. In journalism school I always heard that journalists tend to know a little bit about a lot. It’s the best way to prompt a conversation that has the potential to go anywhere. But there’s nothing like connecting with someone when suddenly you don’t have to be on; when you can be more of your authentic self. Suddenly conversation flows. Suddenly you’re not trying to be engaged, but you actually are. Suddenly you realize that this other person was probably on too, and that, in a way, they’re in the same situation as you.

That’s what I’m most excited about. I’m excited to see where these introductions go. Last week I met a woman at the NAACP Convention Media Reception, and we bonded over our uncertainty about business card etiquette and love of Mexican food. Maybe we will become friends! Or when I pretended I didn’t notice the city manager spill his wine at a fancy dinner, and laughed about it with him when he was called out. Maybe he’ll remember me next time there’s a big press conference. Even the travel writer from Canada a couple weeks ago who we spent the afternoon with. Maybe she was sincere about visiting again in the fall, and I’ll get to spend more time hearing about her travel escapades with her daughter.

I’ve learned that that’s one of the best parts of this job. There are so many connections to be made, and in the best cases, those connections can lead to friendships. I’m still in the process. I’ve met wonderful people, but still have yet to meet my people. The kind of people that after a long week of work I could lounge around and watch movies with, go out for a drink, or continue to explore the city. I have no doubt that I’ll get there, it just takes time. It takes being on and knowing when you don’t have to be anymore.

I have fewer actual locations and attractions to share in this post, unlike previous Cincinnati-focused entries, partially because of being on. Touring the city, conversing and being on is part of my job, which as you can tell, I love. But recently when the weekend hits, I need to power down and turn off for a bit. Being on can be exhausting! There are still so many things to discover, and I have every intention of making use of my weekends to discover them, but sometimes some time off is just as important.

To satisfy any curiosity about Cincinnati, here are a few highlights:

The last couple weeks were filled with excitement and entertainment as the COGIC and NAACP National Conventions came through town, followed by the Cincinnati Music Festival. Through it all, Cincinnati USA (the CVB) sponsored Vibe Cincinnati, which featured free concerts, shows, vendors and entertainment for locals and convention attendees to enjoy. The performers were excellent, and brought such life and, for lack of better word, vibrancy, to downtown Cincinnati.

Definitely one of the most interesting people I’ve come across in Cincinnati. Jack owns a shop called Jack Wood Gallery, which is home to vintage 20th century poster art. Tables and boxes of matted or framed old-fashioned posters fill the store, and Jack’s passion and knowledge of the posters is impeccable. His stories of the history of poster art, of Cincinnati’s printing industry and just about his life experiences are fascinating.

This is a classic Cincinnati staple, bringing me back to my days as a little girl singing the Cincinnati donut shop song. Holtman’s Donuts is a small bakery that makes fresh donuts daily. I tried the maple-bacon donut, which the shop is famous for, and it lives up to its reputation. Good, old fashioned deliciousness.

Jean-Francois Flechet, the owner of Taste of Belgium, came to Cincinnati from Belgium and missed the taste of Belgian waffles. After bringing back his grandmother’s waffle iron and making and serving waffles out of the back of a local market, Jean-Francois’s waffles gained such popularity that he opened his own restaurant. Now, with a few restaurants in the area, Taste of Belgium is a local favorite. Jean-Francois let me sample one of the waffles when we were passing through, and it was beyond compare. Definitely worth a visit.

Consignment shops are the way to go. I stumbled upon The Snooty Fox last weekend, which features name brand clothes and jewelry, plus furniture and home décor, for a fraction of the price. My kind of shopping. Plus I just love the name!

Last week several Cincinnati restaurants featured their burgers for $5 for Cincinnati Burger Week. Burger-lovers could pick up passports with names and locations of all the participating restaurants and get stamps for each burger they tried. Passports could then be entered into drawings for prizes depending on how many stamps each person had. There were several to choose from, but I tried burgers from the Cincinnatian, a historic hotel and restaurant, and Prime 47, a new steakhouse.

To add to my ever-so-social lifestyle, I decided to go to a MeetUp event. MeetUp is a way to join local groups depending on your interests. There are book clubs, running clubs, groups for people who speak certain languages, groups that like to go to happy hour, etc. Whatever you’re interested in, there’s probably a MeetUp group for it. I kept it simple with the New to Town 20s/30s group, and went to Mynt for happy hour. I met some very friendly people who have had nothing but positive experiences with MeetUp. The night was cut short due to a work engagement, but it was nice to see that there are several different ways to meet people. We’ll see if I continue with MeetUp or not, but I think it’s worth a try! 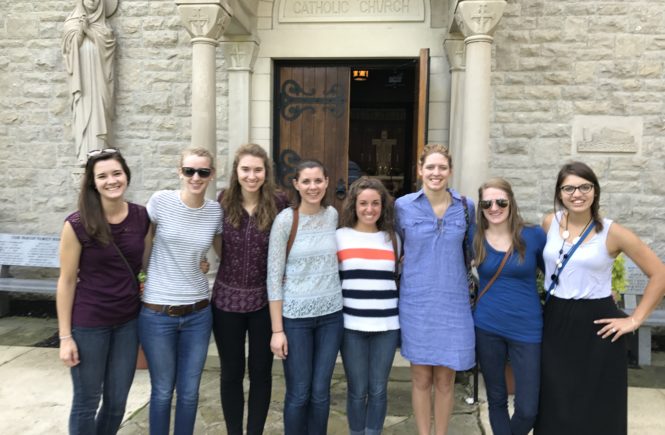